Medical Marijuana For HIV/AIDS – All You Need to Know

HIV stands for Human Immunodeficiency Virus, which can lead to AIDS (Acquired Immunodeficiency Syndrome). It spreads through certain fluids, which attack the immune system of the body. This can result in developing conditions such as cancer, leukemia, pneumonia, liver failure, and other life-threatening conditions.

According to a CDC report, in the United States, there were 15,807 deaths among patients with HIV in 2016.

The Activity of The HIV in The Body

Once the virus enters the body, it makes several copies and enters the bone marrow, brain, and other parts. It gets inside the CD4 cells, white blood cells in the immune system. The system can’t make CD4 cells fast enough, thus making the patient sick.

Even after the patient receive the treatment, the HIV virus doesn’t leave the body completely. However, its effect can be decreased by using various drugs available.

Antiretroviral (ARV) drugs are prescribed to suppress the activity of the virus. But these drugs do not affect the HIV copies residing in the brain.

Additionally, they may have some considerable side-effects with long-term use. These include nausea, vomiting, diarrhea, weakened bones, and neuropathic pain. 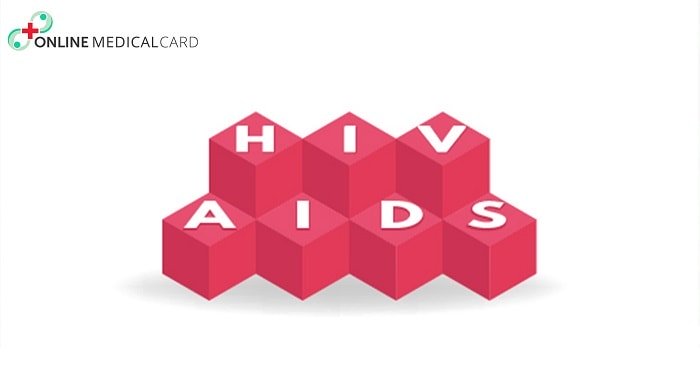 Currently, there is no cure available for HIV, but some drugs can help control the virus. High active antiretroviral therapy (HAART) can help improve quality of life, extends life expectancy, and reduces the risk of transmission, according to the World Health Organization’s guidelines issued in June 2013. To manage AIDS-related symptoms and side effects of other prescription drugs, medications may be prescribed.

Researchers are looking for better solutions to reduce or suppress the activity of the virus in the body. Some scientific studies revealed that marijuana could manage the symptoms and effects associated with HIV. They are now moving forward to study the favorable effects of cannabis on HIV patients.

In the United States, more patients infected with HIV are now considering cannabinoid-based therapies to reduce the effect of HIV infection.

In addition to stopping the HIV virus from spreading in the body, medical marijuana is also beneficial in treating conditions associated with ARV consumption—depression, nausea, pain, sleeping problems, and eating disorders.

How Does Medical Marijuana for HIV/AIDS Work?

Plasmacytoid dendritic cells (pDC) are the immune cells that are responsible for the activation of B-cells (antibody-producing cells). They play a crucial role in host antiviral immune response. By interacting with HIV, its number decreases in the blood. This results in increasing the activity of the virus and ultimately it progresses towards AIDS.

THC in cannabis combat the effect of HIV by dampening pDC activation. This suppresses the PDC function during the early phase of interaction between the host and the virus. Thus, preventing the condition from getting worse.

The synthetic form of THC—Marinol—can help in alleviating symptoms of HIV wasting, and there’re many studies available on the topic.

According to research published in 2016, Marinol can help in stimulating and stabilizing weight in patients with advanced HIV wasting while increasing the average 1% in lean muscle mass.

Although drugs such as Megace are more effective in stimulating weight gain than Marinol, they increase body fat but not lean muscle mass.

Before the legalization of cannabis in the state of the US, the doctors used to prescribe a synthetic pill Marinol, containing THC to reduce the effect of HIV. But the medicine lacks other components of the plant-like cannabinoids and terpenoids that play their significant role in decreasing HIV/AIDS effect.

Inhaling cannabis proved to be more fruitful for the patients. It also produces a large number of CD4 and CD8 cells in the body that fights against the virus in the body.

For this reason, most patients prefer smoking marijuana for receiving quick effects and other stress-relieving benefits.

In addition to stimulating appetite, marijuana can also help in reducing peripheral neuropathy, a risk related to earlier-generation HIV drugs.

A study published in Neurology analyzed the effects of marijuana in people with neuropathy peripheral. Researchers noted that smoked cannabis reduced HIV-associated neuropathy by 34% while in the placebo group, the improvement was only 17%.

Marijuana can also be beneficial in slowing disease progression. A study conducted at Louisiana State University reported that daily THC doses resulted in lower levels of viral activity and higher survival rates in monkeys with SIV, similar to HIV. Additionally, the participants reported a dramatic spike in CD4 and T-cells and weight loss as compared to non-THC users.

Researchers found that THC helped in reducing the immune tissues in the gut, which is a primary site for HIV infection. This way, disease progression can be significantly reduced while maintaining a healthy immune response. 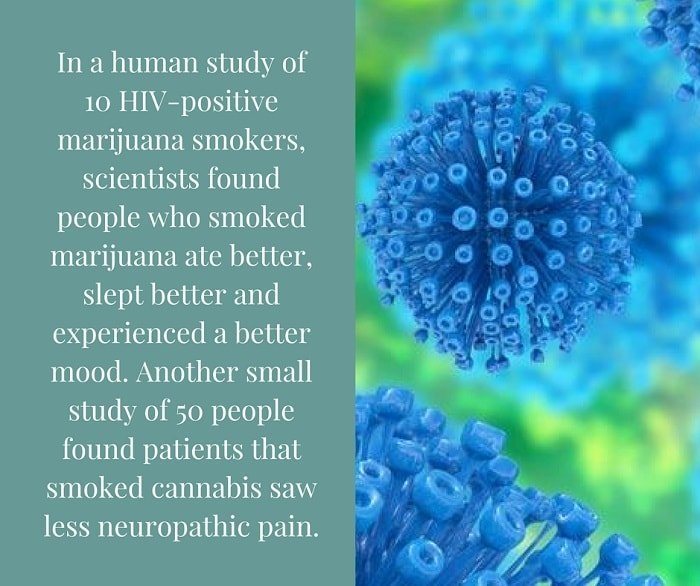 A cannabis’ psychoactive compound THC interacts with the brain receptor cells, which are responsible for brain development and functioning. When you use marijuana recreationally, THC can provide high effects by over-exciting the cells.

However, in children, there’s no scientific evidence of using medical marijuana for HIV/AIDS. Excessive stimulation of brain receptor cells may impact cognitive function, resulting in poor memory and learning skills.

Other risks associated with excessive marijuana use are-

Additionally, marijuana use can be addictive, and there’s no approved treatment for it.

To alleviate your symptoms completely, make sure you discuss your condition with a professional doctor and get sound advice for cannabis dosage, strain and consumption method.

When it comes to using medical marijuana for treating HIV/AIDS, choosing the right strain is important. Try different strains, analyze how your body responds to the cannabinoids, and get the best one for alleviating your symptoms. 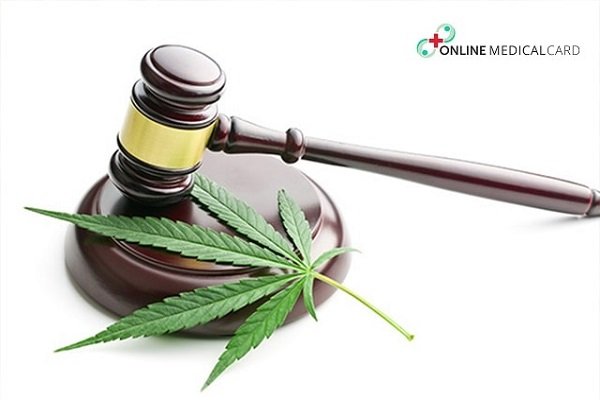 With scientific evidence that cannabis provides is good for health, more states are loosening their regulations for medical marijuana use. Currently, more than 30 US states have approved medical cannabis programs for patients with various conditions.

While the federal regulations say cannabis is a Schedule 1 Drug, i.e. high risks of dependency and no accepted medical use, many cannabis legalized states provide retail sales for adult patients.

Cannabis laws may vary from state to state. So, always read the regulations for cannabis use in your state before using medical marijuana for HIV/AIDS or other conditions.

To use medical marijuana legally, you need to get a licensed doctor’s recommendation letter. With telemedicine services, you can get it online within a few minutes.

HIV is a virus that attacks the body’s immune system, and it can lead to AIDS. The virus can spread throughout the body and can cause several life-threatening conditions such as pneumonia, cancer, liver failure, etc.

Due to the effectiveness of the herb in treating HIV/AIDS symptoms, more patients are now considering it for getting quick relief.

However, there’re some risks associated with marijuana use such as breathing problems, lower total sperm count, etc. Thus, it’s important to talk to a licensed doctor, and get professional advice for what’s right for your condition.