Over the years consuming cannabis has become one of the most simplistic and effective methods of treatment and management of many serious health conditions such as glaucoma, insomnia, anxiety, etc. Following which people began experimenting with different methods of consumption, concentration and products to find the cannabis schedule that suits them the most. And with people eagerly exploring the potential of cannabis, it soon became known as an effective way to manage the severe symptoms of Crohn’s disease as well.

But, how effective is cannabis in the treatment of Crohn’s disease?

Let’s break it down thoroughly and discuss individual aspects.

What Is Crohn’s Disease?

Crohn’s is an inflammatory bowel disease (IBD) that causes immense swelling in the guts or intestines of the person. In addition to excess swelling, it causes irritation and can lead to severe symptoms like:

These physical symptoms often also result in mental anguish and stress for the patient.

Did You Know: Around 2.5 million people throughout the United States have suffered from inflammatory bowel diseases in 2020 alone. The number of patients is predicted to reach a whopping 3.5 million by 2030.

Traditionally, treatment of this severe bowel disorder involves the use of conventional medications such as:

In addition to these medications, the patient also:

Despite such extensive treatments, such intense levels of medication consumption for long periods of time doesn’t seem like a viable option to many patients. Medical cannabis turned out to be a natural and equally, if not more, effective way to deal with the pain, discomfort and inflammation associated with Crohn’s disease.

Can Medical Marijuana Help in the Treatment of PTSD?

Learn everything about cannabis as a treatment for PTSD.

So, how does the relationship between marijuana and Crohn’s Disease work out and is marijuana a valid form of treatment for it? Let’s find out.

Marijuana and Crohn’s Disease Does It Work?

Owing to the therapeutic effects of cannabis on the endocannabinoid system, cannabis turns out to be a valid form of recovery for several health issues including Crohn’s disease. Since the main afflicting symptoms of this disease are in terms of intense pain, inflammation, and appetite loss resulting in weight loss, marijuana could quite possibly be the right fit.

Cannabis and cannabinoids are largely responsible for the consumption wave of natural and organic medications that have managed to sweep almost all nations worldwide. In the US in particular, a history of 25 years of welcoming marijuana laws could be credited with the ever increasing popularity of medical marijuana.

Alluding to the effects of marijuana on a patient suffering from Crohn’s Disease is best observed when the proof of symptom relief is presented elaborately. Hence, now we will begin to cover the symptoms of this disorder that can be treated with the help of marijuana.

How Does Medical Marijuana Treat Symptoms of Crohn’s Disease? 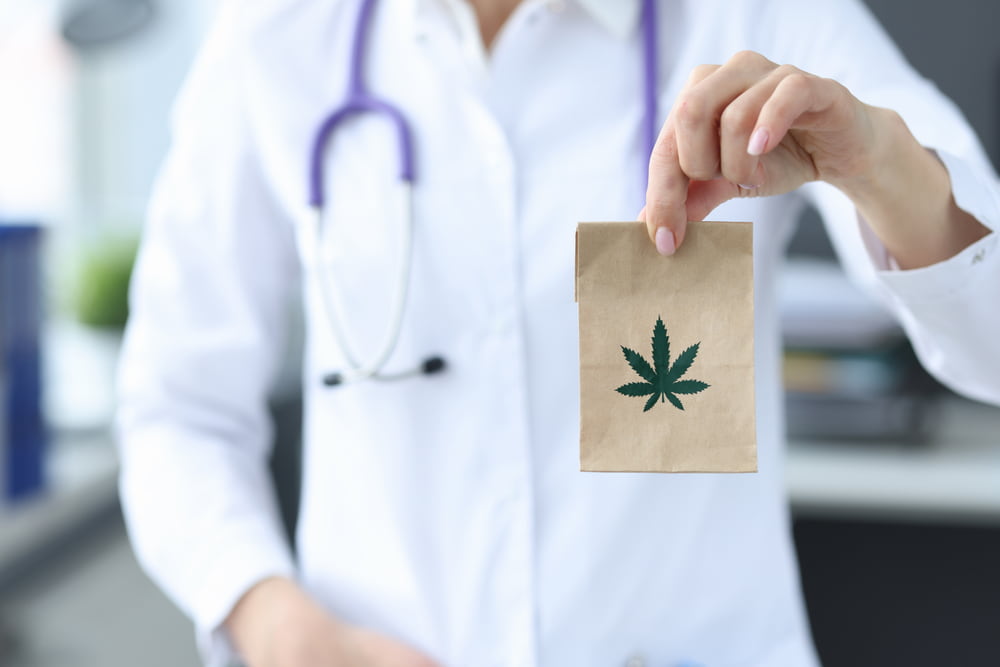 Medical marijuana can treat many severe symptoms of Crohn’s Disease. Let’s go through some of them.

One of the major symptoms of Crohn’s Disease is intense, and sometimes unbearable, abdominal pain. The pain is often unbearable and hinder the ability of the patient to conduct everyday life activities.

Marijuana proves to be a reliable and dependable form of medical assistance in this case. Due to the successful way of how cannabinoids bind with the ECS receptors in the body, they work  effectively in lowering the pain and discomfort.

Despite sometimes being used for weight loss benefits, marijuana is majorly recognized for its ‘munchies effect’. Patients of Crohn’s disease often lose all their appetite and the activity of eating food becomes a huge task for them. Here cannabis comes in and saves the day. The simple munchies effect can help develop a feeling of hunger in people, successfully rectifying this symptom for them. It also intensifies the olfactory senses making food more appealing and helps patients develop a positive association with food.

This helps gain weight and get back on a healthy meal routine.

Irritation in the intestines is another common symptom of Crohn’s disease. The inflammation of the guts can result in them rubbing against each other which will further lead to intense irritation and discomfort even on the most normal days for the patients.

Diarrhea is defined as a medical condition where a patient suffers from frequent, loose, watery stools and stomach pain. Crohn’s is also a major cause of diarrhea in patients, adversely disrupting the lives of people. Administration of certain cannabis strains has been found to be particularly helpful in this case. By a majority of such case studies, smoking cannabis is considered to be one of the best ways to get rid of diarrhea.

Now that we know, Crohn’s disease causes diarrhea, it would obviously also have to be the cause of nausea in patients. Nausea is the feeling of sickness that often results in vomiting. This then becomes another major symptom of this bowel disorder that can be helped with the use of cannabis. Cannabis can effectively relieve the symptoms of nausea which is a fact backed by many relevant studies. Hence, patients must always give this solution a try to find if and how effectively it can work for them on a personal basis.

When a patient is suffering from a severe gastrointestinal issue like Crohn’s, naturally there is a level of anxiety or stress that will also invariably trouble the patient. Physical distress is often a reason for a great deal of mental distress. Fortunately for the IBD patients, medical marijuana can prove to be a rather powerful stress relief medication. Cannabis helps with anxiety by calming all anxious thoughts.

Hopefully with this extensive list of benefits that marijuana offers a patient suffering from this bowel disorder, a patient would like to experiment with this alternative form of therapy. It is important to note here that a patient who is indeed interested in exploring the possibilities of marijuana in the treatment of Crohn’s should consult with a valid MMJ doctor.

Questions You Should Ask Your Medical Marijuana Doctor During Your Consultation

Find out the right way to talk to a doctor during a consultation.

Potential Side Effects of Marijuana Use for Crohn’s Disease

Any medication can have a negative impact on the health of the patient if they aren’t completely aware of the potential side effects. Hence, it becomes our duty to present a list of such possible adverse effects so that the patient can mindfully consume marijuana for the treatment of Crohn’s Disease in the best manner possible. If consumed carelessly or without exercising caution, consuming marijuana for Crohn’s can lead to:

When the patient remains in the dark about the consequences of consuming a particular medication without exercising the right precautions, it becomes highly dangerous for them to consume it in the first place. Being aware of what you put in your body should be of primary concern to you and only then will you be able to overcome such difficult times in your life.

It is important to note here that such side effects only affect you, when you don’t consult a doctor prior to the consumption or you consume it carelessly. Hence using this medicine should be monitored at all times and consumed only with a purpose in mind.

After this detailed discussion, we’re hoping for a positive reception among our readers; after all this guide is all meant for your benefit. If there is any additional query don’t forget to drop in a comment or mail us. Let’s support the narrative of marijuana being the ultimate form of natural therapy!