Have you experimented on drinking cannabis-infused tea? Tea in itself has a calming effect and is a great alternative to traditional edibles.

According to a new study published in the Journal of Pain Research, it can help patients suffering from chronic pain. Italian researchers assessed the use of cannabinoids for intractable pain in over 600 patients. Study subjects were typically over the age of 60 and consumed cannabinoids via infused tea. They reported that no subjects in the study complained of severe side effects and that only a few patients discontinued cannabis treatment.

In conclusion, researchers said that “The treatment seems to be effective and safe in the majority of patients.” 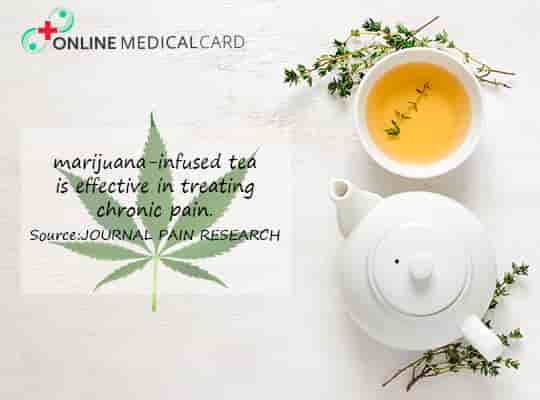 The result was not a surprise. Infusing tea with cannabis has been around since 2737 B.C.  A Chinese emperor prescribed the concoction to combat a host of illnesses. Aside from pain, cannabis tea may help relieve anxiety, nausea, and symptoms of autoimmune disorders.

You can start off with 1 cup of cannabis tea each day. For new patients, you can take even smaller amounts (half cup). Then gradually increase the dose (up to two cups per day), also known as microdosing. The effects usually become noticeable after 30-90 minutes and may last up to 4-8 hours. This mode of administration is well-suited for patients with muscle spasms, nausea, and rheumatoid pain because of the slow-acting, but long-lasting effect.

You can make your own infused tea with a few drops of tinctures or consume a ready-made tea from BrewBudz. Apply for a medical marijuana card California today and get brewing!