Medical Marijuana for Spasticity: Is It an Effective Treatment? - July 18, 2022

Spasticity is a serious condition that affects the muscles, causing them to tighten or stiffen, thus preventing normal movement. When sufferers try stretching out their muscles, they experience resistance and contraction. This in turn, affects basic functions like speech, movement, walking, etc.

Medical marijuana is known to help with all these symptoms. So, does this mean medical marijuana and spasticity have some connection? To answer this, we must first understand the condition and its symptoms better.

There is a slight difference between muscle spasticity and rigidity in terms of what causes them. Spasticity occurs from damage caused to the corticoreticulospinal (pyramidal) tracts, located in the frontal lobe or from chronic neurological problems. On the other hand, rigidity mostly occurs due to the malfunctioning of extrapyramidal pathways, and sometimes due to lesions on the spinal cord and mesencephalon.

If left untreated, spasticity can lead to permanent shrinkage and contraction of the muscles. This can even lead to them getting locked in one position, which makes every day tasks harder to achieve, significantly decreasing the quality of the patient’s life. This medical condition is also commonly seen in children, referred to as movement disorders.

Spasticity needs to be treated when it causes physical pain and the patient’s ability to function and perform daily tasks is compromised. However, treatment for all patients is not the same and varies depending on their preferences, goals, and needs. Some conventional treatment options include:

However, they all hold some drawbacks, such as weakness, dizziness, liver inflammation, sedation, etc. Moreover, the drugs will build a tolerance and not work great in the long term. As a result, many patients will opt for surgical options.

In case you do not wish to do that , and are looking for alternative treatment options, medical marijuana has great potential. Let’s learn more about it and how it can help with spasticity.

Medical Marijuana and Spasticity – Is It a Viable Treatment Option?

If you are considering marijuana to regulate spasticity, you may be aware that it is known to help with chronic nerve and muscle pain. It is also common for patients of spasticity to rely on cannabis for help as the medication offered to them can often have adverse side effects. So, let’s take an in-depth look into how cannabis use can help with spastic symptoms.

According to some research done on animals, marijuana was found to calm muscle spasticity. It is believed that spams originate in parts of the brain responsible for controlling movement, which include several areas with an abundance of cannabinoid receptors.

However, it was also concluded that the animals became less active when given a higher dose of marijuana. There have also been a few small clinic trials, but due to the low number of participants, they do not hold much credibility. So, research still remains lacking when we look at marijuana as a treatment option for spasticity.

Using medical marijuana for nausea has a lot more evidence as opposed to using it for spasms. It is known to react with the brain receptors responsible for regulating pain. As a result, the user’s perception of pain is altered, allowing them to find relief. It is great for treating various sorts of physical pain, such as nerve pain, joint pain, etc.

According to research, marijuana can reduce joint pain in consumers. In a study conducted in 2018, more than half of the 1,483 participants reported that CBD helps them relieve pain and almost half said that it was beneficial for treating joint pain and arthritis. 30.4% of the participants reported using CBD with other oral medicine and 35.8% of them reported using it separately.

Related Article: How Cannabis Is Used to Relieve Nausea

CBD, specifically, has anti-inflammatory effects, which can help reduce almost all types of pain. THC is also great for dealing with pain, and patients of chronic pain often consume it in high amounts. However, the tolerance should be built up over time.

This is usually not a symptom of spasticity, but one that often accompanies it. The reason for that being they are both connected to nerve damage, some of which can trigger overactivity in the bladder, commonly referred to as OAB. At the moment, there are two types of medication available for the treatment of OAB.

However, those drugs are very powerful and need to be supervised at all times, as consuming too much can have adverse side effects. So, how does cannabis help with OAB?

As bladder control is also connected to the nervous system, cannabis is a viable treatment option due to its ability to bind with receptors in the body. The components of the cannabis plant activate these receptors, and help with treating bladder control issues. There is also a lot of ongoing research to back this information.

On the other hand, the medical use of marijuana to treat constipation is nothing new as this treatment has existed for hundreds of years. There has also been a lot of research on the effects of cannabis in reducing constipation. The results seemed promising.

Before we begin, let’s clarify that simply consuming cannabis cannot improve the quality of one’s life. However, it has a lot of benefits which ultimately allow the consumer to feel much better.

For instance, cannabis induces sleep and helps with insomnia and sleep deprivation. This is a common problem in individuals suffering with spasticity as they struggle to sleep through the pain. It is also known to impart calming and soothing effects.

Now you are aware of the benefits of using medical marijuana for spasticity, but are there disadvantages or risks? Let’s find out!

Medical Marijuana and Spasticity The Downsides

Due to the absence of proper research, we are not yet aware of the risks of using medical marijuana specifically in individuals with spasticity. However, there has been a lot of research on its disadvantages in general, so let’s take a look at them in brief detail.

Cannabinoids affect the cardiovascular system, which raises the heart rate. This causes some people to feel dizzy. However, regular users do not experience this, according to research. You can also avoid this by opting for CBD dominant strains/ products, regulating the quantities, or staying constant with the consumption.

Related – Tips to Follow Before Buying a Cannabis Product

Similar to any other form of medication, cannabis may react with your other medication. To avoid any adverse side effects, you will have to get in touch with a skilled 420 doctor. If you are looking for a place that provides affordable consultations form highly skilled marijuana doctors, look no further than Online Medical Card.

The doctors will ensure that you understand marijuana drug interaction in depth and stay clear of any mishaps. Moreover, they will help you understand the proper dosage, which allows you to prevent most of the side effects.

Related – Can You Smoke Weed on Antibiotics?

Using marijuana can lead to Cannabis Use Addiction (CUD). People with this problem exhibit symptoms like feeling emotionally and socially closed off and physical stress. It can range from mild to severe. It may also cause brain fog, mood swings, and cravings.

It is best to consume medical marijuana under the supervision of a healthcare professional. This allows you to get the best out of this natural medication, while also lowering the chances of adverse side effects. 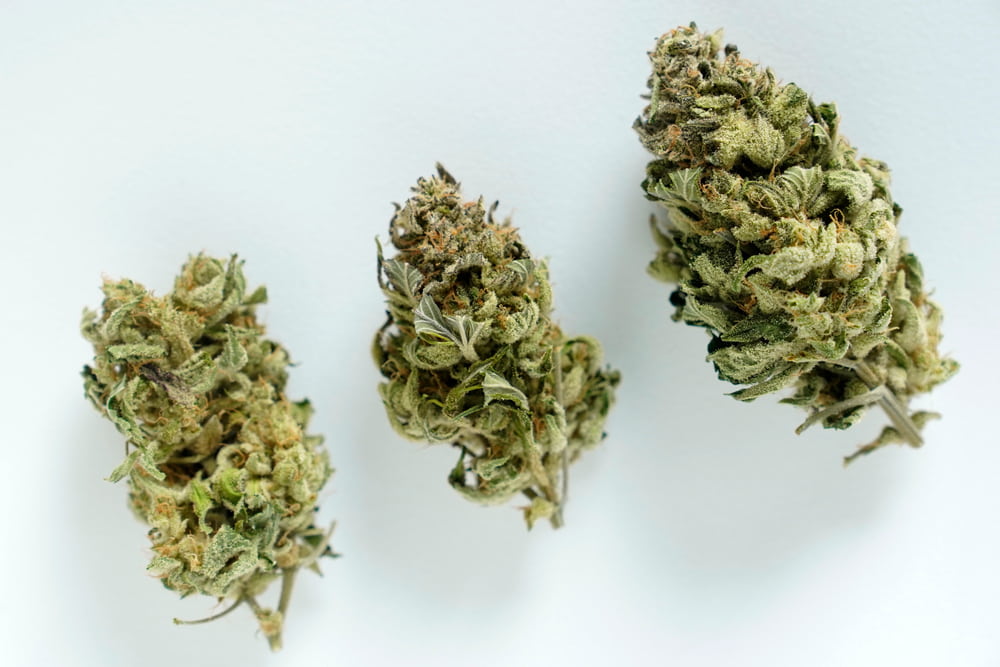 There are thousands of marijuana strains to choose from, and guess what? They have varying effects, sometimes even completely opposite! For instance, some strains may make you dizzy and induce sleep, while others promote creativity and boost energy. So let’s look at some that are best for muscle spasticity.

Strains With Higher or Equal CBD

Cannabis with higher or equal CBD works perfectly for newbies or those with a low tolerance. They are also a great option for those who want to consume it for the medical benefits but do not wish to feel intoxicated.

Hybrid strains are combined Cannabis Indica and Cannabis Sativa plants. They are available in different ratios and can be either Sativa-dominant or Indica-dominant.

When consuming a hybrid strain, you get the benefits of both types of strains. Some hybrid strains that help with spasticity include:

So, with these strain options, can you replace medication with cannabis to treat spasticity?

Related: Guide to the Best CBD:THC Ratio for Anxiety

As you have read above, they both come with advantages and disadvantages. Many people who are on medication for spasticity wish to explore medical marijuana as an option because they create a tolerance to them and the only options left are surgical.

On the other hand, it is not that easy to build a tolerance to marijuana, and it even takes years for users to do the same. Moreover, you can always reset your tolerance. There are also many strain options to explore, as opposed to the two types of spasticity medication.

However, you should never leave medication in between. You cannot simply switch over to marijuana and expect it to make up for the spasticity drugs. Their consumption needs to be tapered over time.

Medical marijuana has countless benefits for spasticity and its symptoms, and very less risks in comparison. However, if you wish to switch from your medication, or start marijuana for its medical benefits, you shouldn’t do so without medical assistance.

Doctors can help you safely transition from one medication to cannabis, and help you understand the correct dosage and methods of administration that may be suitable to you. So, it is best to not experiment on your own and get in touch with experienced doctors for the best treatment results.