Cannabis for Multiple Sclerosis: Is It a Viable Treatment for MS? - January 18, 2022

Cannabis has become a preferred alternative to several pharmaceuticals ever since it received a green signal by the majority of states in the United States. Recognized for its medicinal properties, the plant has proven to be an extremely beneficial and effective treatment for a number of health conditions. Medical marijuana doctors have been recommending the herb to the patients with common and minor health conditions as well as those with chronic, incurable health diseases and disorders.

Multiple sclerosis happens to be one such medical condition which can benefit with the use of medical cannabis. While there is no reliable treatment that can completely cure or alleviate its symptoms, medical marijuana doctors recommend cannabis as a possible treatment. Let’s see if cannabis can truly help an MS patient have a better quality of life.

What Is Multiple Sclerosis?

Multiple sclerosis is an autoimmune disorder that affects the central nervous system and spinal cord. The lack of a specific cause is the reason why there’s no foolproof cure for MS yet.

What basically happens in multiple sclerosis is that the immune system of an individual starts attacking the myelin sheath which covers and protects the nerve fibers. This exposes the nerve fiber, damages the brain cells, affects the communication between the central nervous system and other parts of the body, and causes inflammation.
Even though there is no clear information about what causes multiple sclerosis, experts believe there are a few risk factors that determine if the individual will develop the condition. These factors include:

Can Cannabis Help in the Treatment of MS?

Yes, cannabis can help in the treatment of multiple sclerosis. Although it may not serve as a cure for the condition, it can help manage symptoms and enhance the quality of life.

Cannabis has proven to be a reliable medication that would reduce the severity of symptoms such as pain, inflammation, muscle stiffness, and bladder dysfunction. There is sufficient anecdotal evidence that suggests the plant offers favorable benefits to MS patients.

What Does the Research Say? 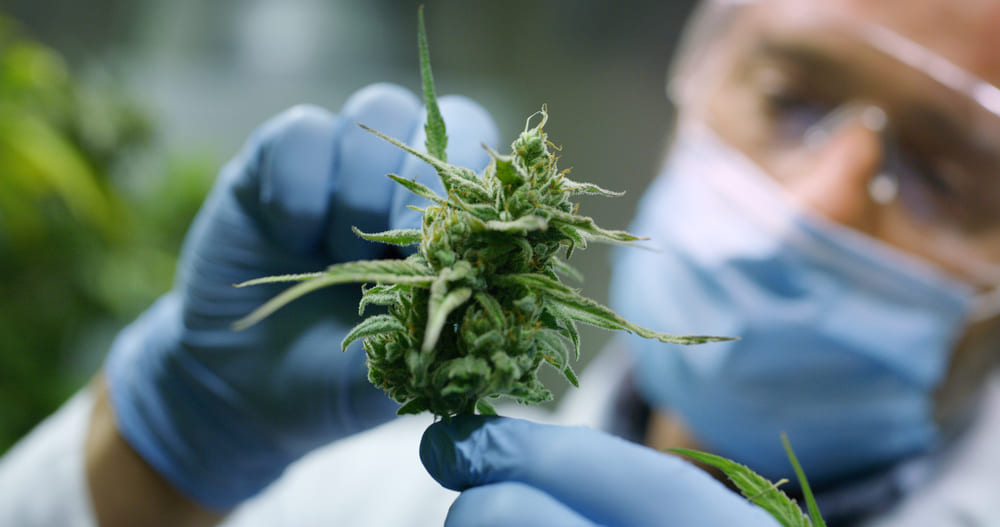 Researchers have studied the effects of cannabis on patients of multiple sclerosis. Although the researches conducted are small and limited, they are still reliable and suggest that the plant is probably effective on various symptoms of MS reported by the patients. Surveys conducted on MS patients also recorded that the patients experienced relief from pain, sleeplessness, and spasticity after consuming the herb.

In addition to that, the National MS Society stands in favor of cannabis use for multiple sclerosis and advocates for the right of patients to choose the plant as an alternative medication. However, it simultaneously speaks for the need for more reliable, large scale research.

Medical experts in the American Academy of Neurology also released guidelines for using medical marijuana as an alternative treatment for multiple sclerosis. This suggests that the experts are convinced by the effects and potential benefits of the plant and its derivatives for Multiple Sclerosis.

Benefits of Cannabis for Multiple Sclerosis

How Can Cannabis Improve Symptoms of Multiple Sclerosis?

Symptoms of multiple sclerosis vary widely from individual to individual but there are a few symptoms that are common among majority MS patients. This suggests that the effects of marijuana may not be consistent for everyone.

By activating CB1 receptors, cannabinoids can alter several body functions including that of the central nervous system and also reduce pain. According to a research, applying CBD infused products on the affected area of the body can also significantly reduce pain in multiple sclerosis patients. Though the relief will be on the targeted area only.

Multiple sclerosis is a condition in which overactive immune system causes inflammation. And marijuana is well recognized for its anti-inflammatory properties.

Out of the CB1 and CB2 receptors, CB2 receptors are generally responsible for inflammation. The cannabinoids can help control inflammation by activating these receptors which helps lower the signals that trigger inflammation in the body. By pulling the reins on inflammatory reactions, cannabis can help reduce the severity of inflammation due to multiple sclerosis and, in turn, other symptoms of the condition such as pain, physical discomfort and lack of sleep.

Since patients feel immense pain during MS attacks, it can further develop fatigue and dizziness. In addition to that, muscle weakness due to restricted movement can also make an individual feel weak, and prone to more sickness.

Cannabis can help here by calming the body and mind with its sedative effects. It is important to note that cannabis exists as different strains and not every strain offers the same effects. There are two types of marijuana strains – Indica and Sativa. While Indica strains are known to offer relaxing, sedating effects, cannabis sativa can offer alertness and energy instead. This will awaken the individual and probably make them feel active, which may reduce fatigue and dizziness. It’s best to get the recommendation of a professional or someone who is familiar with the most effective cannabis strains and products for fatigue and dizziness.

Cannabis and its derivatives can influence the endocannabinoid system which has a role to play in bladder functioning. Research shows that medical marijuana can help reduce the urinary incontinence in patients of multiple sclerosis.

Even though the studies conducted are on small groups and for short durations of time, there is significant evidence that suggests marijuana can help with neuropathic pain in patients of multiple sclerosis. The cannabinoids, by binding with the cannabinoid receptors of the endocannabinoid system can influence the central nervous system, which can in turn help in reducing neuropathic pain. However, more research is required to promise effectiveness in extremely severe cases of neuropathic pain.

Multiple sclerosis negatively impacts the sexual life of MS patients, directly or indirectly. Surveys conducted suggest that around 63 percent people with multiple sclerosis reported their sexual activity had reduced after getting diagnosed with the condition.

Medical marijuana is reported to increase the sex drive in both men and women. People with anxiety, stress, lack of confidence, and other health conditions that have an impact on sex life and experience, have tried cannabis and reported positive results. It can be used by patients of multiple sclerosis as well.

According to research, sleep disorders are pretty common and intense in patients with multiple sclerosis. While sleep disorders in general are common as well, the frequency is higher in MS patients than the general population. Pain, immobility, and stress related to the condition can trigger sleeplessness and insomnia even further.
THC, the primary psychoactive cannabinoid that offers the infamous high can also induce sleep. Studies have shown that consuming marijuana with high THC concentration reduces the REM sleep which is the dreaming phase of the sleep cycle. The same cannabinoid along with CBD and other minor cannabinoids can reduce pain and promote relaxation. This way, it can help the patients of multiple sclerosis have better quality of sleep. 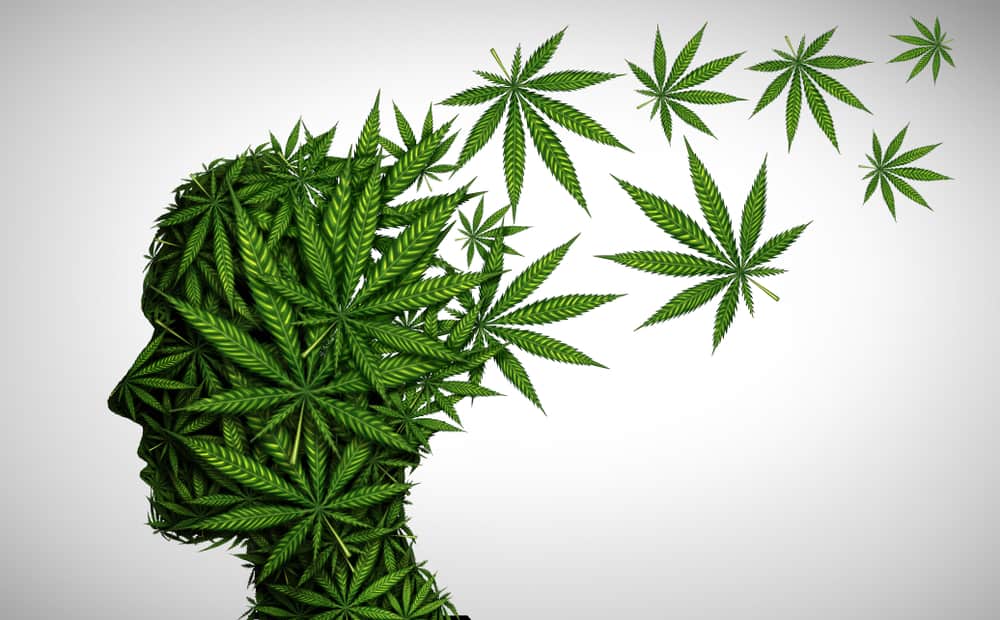 It is very normal to feel low at times when you are dealing with the symptoms of multiple sclerosis. The condition can be triggering and it may affect your mental health in the worst way possible. Stress, sleeplessness, and chronic pain can cause depression in multiple sclerosis patients. It is important to recognize the symptoms and talk to your doctor about it.

However, instead of popping antidepressants, you can choose to consume medical marijuana. Studies have found that there is a possibility marijuana can reduce depression and its symptoms.

Multiple sclerosis can cause stress. But in turn, the same stress can trigger the symptoms of multiple sclerosis and affect the quality of life. While stress is one of the triggers of the condition, the condition itself triggers the trigger at times too. And for a patient it is extremely important to realize that stressing about the situation, feeling low or overthinking so much that it leads to insomnia is only going to worsen the situation for them. While we highly recommend taking therapy to deal with the symptoms and triggers of stress, we believe consuming small doses of marijuana can possibly help as well.

Can Medical Marijuana Help in the Treatment of PTSD?

Again, not eating properly due to bladder dysfunction or pain will lead to muscle weakness and fatigue. It can contribute to immobility which again can worsen the symptoms of MS. It is important to eat a proper, balanced diet. Nutrition and workout will probably ease out the symptoms and enhance the quality of life. We understand you may not feel like eating at times. THC can help you in that situation. The cannabinoid can stimulate appetite and help you eat more and better. However, what you choose to eat is in your hands. We suggest eating healthy, nutritious food.

Pain can cause insomnia but if you choose to stay awake, your body will not get to rest. Resting is important for your body and muscles. In fact, sleeping can reduce pain to some extent. But it may not be easy to sleep. We realize chronic pain can easily cause insomnia and to deal with this issue we recommend meditation and marijuana. Both of them work perfectly well on their own but combining the two is probably going to enhance the benefits.

A Detailed Guide On Using Cannabis for Insomnia

CBD or THC Which Is Better for MS?

A research conducted specifically on the effects of cannabidiol (CBD), the non psychoactive cannabinoid of the cannabis plant, for MS suggests that the cannabinoid can improve mobility in patients. But according to the guidelines created by the American Academy of Neurology (AAN), oral cannabis extract and synthetic THC are effective in reducing patient reported symptoms of spasticity and pain.

This suggests that both the cannabinoids have something to offer to the patients of multiple sclerosis.
People generally prefer CBD over THC because the latter is popular for its euphoric, psychoactive effects. However, that does not mean THC does not have any medicinal properties. The role of THC in using marijuana as a treatment is as important as CBD or any other cannabinoid.

Multiple sclerosis has a number of symptoms and a single strain may not work for all the symptoms. While some symptoms like dizziness, muscle stiffness, and fatigue may require sativa or sativa dominant strains, issues like insomnia would require indica or indica dominant strains.

It is advised to consider the issue and the time of consumption before picking a strain. For beginners who do not want overpowering euphoric effects, it is better to stick to marijuana strains that have equal or high amounts of CBD.

Some marijuana strains that work perfectly well for multiple sclerosis include:

Medical marijuana can be a viable treatment option for multiple sclerosis as there is enough scientific evidence that supports the medicinal potential of the plant. But since the condition is incurable and can have different levels, symptoms, and severity, we highly recommend consulting a medical marijuana doctor before self medicating with the plant. It is even important to get an online medical card so that you can have access to better quality marijuana that is available for patients with qualifying medical conditions only.