Cannabis has found associations with multiple medical conditions, to the point that it is being recommended by physicians as an alternative treatment. Even the FDA recognizes the potential of cannabis to some extent, having legalized hemp-sourced products as well as Epidiolex, a CBD-based medication for the treatment of infant epilepsy.

With other states following behind on this trail to legalization, it makes you wonder about the hidden potential of cannabis. Even though the herb is not considered to be a medication and lacks extensive research, it is still being recommended for medical purposes.

So when it comes to a red blood cell disease like Sickle Cell Anemia, can we entrust cannabis to help manage its symptoms?

Before we get to answering this question, let’s dig a little deeper into what SCA is, what are its symptoms, and what research has to say about the effect of cannabis on SCA patients.

What Is Sickle Cell Anemia?

Sickle Cell Anemia is a red blood cell disorder that prevents high oxygen blood from reaching all parts of the body, sometimes leading to blockage, especially in thin vessels.

You probably remember what a red blood cell looks like, maybe from the diagram you drew in fourth grade or the science fair you went to in seventh grade. Let me recap it for you. A red blood cell is disc-shaped and flexible, properties that allow it to pass through blood vessels.

In the case of a patient suffering from SCA, these red blood cells get deformed, taking the shape of a sickle (in other words, going from a full moon to a crescent) and turning rigid. This rigidity and change in shape lead to blockage of blood in blood vessels, preventing both blood and oxygen from reaching the rest of the body parts, sometimes even the brain.

Not only this, but in a patient suffering from SCA, the red blood cells die prematurely leading to an overall shortage of red blood cells in the body. This kind of shortage leads to conditions like anemia. While there is no particular cure for patients with SCA, there are treatments that can help with controlling the symptoms.

The symptoms of the disease can show up in infants of 5 months leading to early diagnosis of the condition. While the symptoms and their degree may vary from patient to patient, here are some commonly found symptoms in patients of SCA.

Apart from Anemia, these include:

But, What Causes This Disorder?

I’m sure you’ve heard of hemoglobin. This protein, present in the red blood cells is responsible for taking oxygen to the lungs and eventually to the rest of the body. However, in the case of SCA, the hemoglobin-producing gene, beta-globin (HBB) goes through mutation and produces an abnormal version of the protein.

This sickle cell hemoglobin makes the red blood cells stiff and sticky, and the absence of oxygen leads to their deformation.

Did You Know: SCA is an inherited disorder, but most of the time, the symptoms show up only when both parents are carriers of SCA.

Sickle Cell Anemia is usually inherited. If either of the parents has traces of SCA, it’s carried over to the child. However, it is only when both parents carry the deformed red blood cells that the child also shows signs of the same disability.

On the other hand, when only one parent is the carrier, the child has both healthy and deformed red blood cells and does not show the same signs of disability. They can, however, become a carrier for their offspring.

It is also a possibility that one inherits a sickle cell gene from one parent and another form of deformed gene from the other, leading to a different type of sickle cell disease. 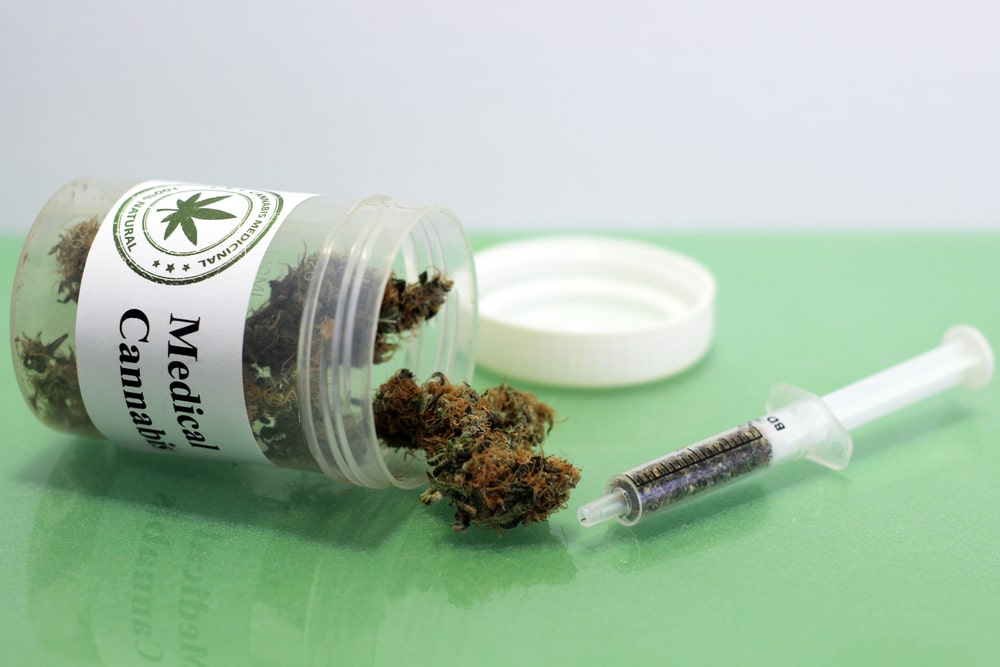 Generally, the treatment plans for sickle cell disease revolve around pain, preventive medications, transfusions, and transplants as well as genetic therapies. It is recommended for SCD patients to stay hydrated, exercise regularly but moderately, reduce the consumption of over-the-counter medication that can affect the kidneys, and take certain supplements containing folic acid.

However, cannabis too seems to have won the attention of multiple SCD patients for its therapeutic benefits. While only a few states have added the condition to the state-approved list for cannabis use, other states have allowed their doctors to make the last call. For this reason, several telemedicine platforms like Online Medical Card, help patients get approvals for using cannabis for sickle cell anemia and other medical conditions (provides it is a qualified condition in their state.)

The major symptom that patients with Sickle Cell Disease go through is pain, both acute and chronic. This in turn also has a substantial effect on a patient’s mood throughout the day. Fortunately, cannabis has shown its efficacy in both – reducing pain and elevating mood.

Also Read: How to Find a Cannabis Doctor Near You?

Sickle Cell patients often go through episodes of extreme pain which we refer to as crises. Since the red blood cells in this condition tend to change their shape and become rigid, it becomes a lot harder for them to pass through thin blood vessels. This can lead to pain in a majority of organs including the chest, belly, and joints. Acute chest syndrome is one such complication that happens due to the small vessels in the lungs. This also leads to acute hypoxia – complications in the lungs due to low oxygen levels.

This blockage of the blood flow is what leads to intense bouts of pain that can last anywhere between a few hours to a few weeks. These anemic crises, especially in pediatric patients are associated with high morbidity and mortality rate in SCD patients.

Generally, physicians prescribe a few medications and therapies to ease the pain and make the process bearable:

According to a cross-sectional study of adults with SCD, most daily consumers of cannabis are those that are worst stricken by pain crises. In other words, patients who go through the most painful episodes tend to depend on cannabis to feel at ease. And this isn’t even the focus of the study.

While you would expect these patients (going through the worst pain episodes) to make frequent visits to the hospital that is not the case. Those patients who depend on cannabis have 1.8% fewer admission as well as 1.2% fewer annual emergency room visits.

Cannabis as a plant has found use in treating sickle cell disease. This is possible simply because of the cannabinoids that can be found in the plant. Multiple chemical compounds that constitute a high-quality cannabis flower have therapeutic benefits of their own which make them ideal for replacing conventional medications and supporting SCD treatment.

These chemical compounds include minor cannabinoids like CBN, CBG, and CBD, terpenes like beta-caryophyllene and pinene as well as flavonoids.

A randomized clinical trial to evaluate the effects of inhaled cannabis for pain in adults with Sickle Cell Disease was initiated to check if the 1:1 ratio of THC to CBD was safe and beneficial for patients. As it turns out, the ratio was safe and effective in improving the mood of patients, while its effect on the pain levels was still unknown.

When it comes to sickle cell anemia, the only way to treat this condition from the root is to get a stem cell or bone marrow transplant. However, because of the risks that come with these treatments, physicians recommend other ways of treating the condition which includes medication, blood transfusions, and these days, also cannabis.

Marijuana is not a cure for sickle cell anemia. It is only used to manage symptoms of pain in patients.

In the case of this medical condition, cannabis is majorly consumed or applied for its analgesic properties. Along with pain relief, the herb can help reduce the anxiety, stress, or depression that stems from chronic pain associated with the debilitating systematic disorder.

While SCA leads to a reduced life expectancy in patients, cannabis helps makes that period bearable and even comfortable.

There is a lot we do not know about cannabis, but we’re still sure of one thing. The herb can provide relief to thousands of patients every day. The analgesic and anti-inflammatory benefits of the herb are what make it so commonly used amongst sickle cell patients. Not just that, but multiple states are on the edge of approving the condition for cannabis assistance for the same reasons.