Can Medical Cannabis Help in the Treatment of Anorexia? - April 08, 2022

There has been much debate in regards to the eating behavior that cannabis instigates in the bodies of the users. Some say it causes ‘the munchies effect‘ which leads to an increased appetite, whereas others claim that it is an effective appetite suppressant. These conflicting statements make it necessary for us to resolve all doubts and confusions.

If the results come out to be favorable then exploring the potential of marijuana for eating disorders can become a viable option. Before we find out the benefits of consuming cannabis for an eating disorder like anorexia, we need to first go over all the basic information.

Anorexia or anorexia nervosa is a severe eating disorder. This disorder develops when people become obsessed with their personal body weight and starve themselves to keep looking slender or thin. Around 9% of the US population suffers from this eating disorder at least once in their lifetime.

Not only does this disorder hamper the physical health but it can also be detrimental for the patient’s mental health. The patients suffering from Anorexia have a deep fear of gaining weight and becoming fat. Because of this, there are times when the patient:

This erratic eating behavior becomes a habit which then further takes on the shape of this disorder. People suffering from Anorexia nervosa often complain about:

More than the physical trauma that the patients undergo, this disorder causes intense mental anguish as well. The disappointment when the person is unable to reach their desired body weight can severely scar their mind for years which can further lead to development of many anxiety and depression symptoms. To counter this issue then becomes a matter of great concern. Before we deliberate on the topic of medical marijuana for anorexia any further, let’s first talk about the traditional treatment methods that people have used for its treatment.

Did You Know: As per statistics, eating disorders cause 1 death every 52 minutes which is about 10,200 deaths each year in the United States of America alone.

As anorexia is as much, if not more of, a mental disorder as a physical one, health practitioners have over the years developed many behavioral therapies for its treatment. Let us briefly talk about them below.

Cognitive Behavioral Therapy or CBT is quite effective for people to eradicate this disorder from the very root. A one-on-one talking therapy often helps the suffering patients to voice out their deepest fears and with the help of a therapist to find out the flaws in their obsessive eating habits. The emotional effects on the eating behaviors as well as the distorted self image is something that the doctors could resolve after an intimate discussion.

There are no real medicines that doctors prescribe for Anorexia, instead it is quite common to consume anxiety or depression pills. The doctors recommend these pills to people to counter the negative feelings which they get due to their bodies. This is done to support the idea that when the anxiety and depression is no longer there, the people will not get assaulted by any negative thoughts about their personal body weight.

Other Mental and Physical Build-Up Exercises

Yoga and meditation in tandem are some important mental and physical activities that the patients can adopt. Meditation will work to improve the moods and ultimately help the patient build back their self image. Whereas yoga and healthy eating habits will ensure that the physicality of the patient remains at its optimal level.

Medical Marijuana for Anorexia – Can It Help Treat the Condition?

Yes, medical cannabis can help in the treatment of Anorexia. This can be confidently stated after the cropping up of many important studies regarding the therapeutic benefits of medical cannabis on the stimulation of appetite. It would then be a shame if people don’t use this information to the best of their abilities.

As we all know cannabis can significantly help the Cancer/HIV patients by stimulating their appetite. It then doesn’t seem like a far off idea to employ it in improving the hunger levels of patients suffering from an appetite loss disorder like Anorexia too. Let us now uncover all the important benefits of cannabis consumption for Anorexic symptoms in the next section.

How Can Medical Marijuana Help Manage the Symptoms?

There are certain symptoms of anorexia that medical cannabis can directly address and resolve. Let us list them down.

The most apparent symptom of anorexia is the reduced appetite or appetite loss. This is something that inevitably develops when the person is eating less or vomiting out whatever they have eaten. This leads to many grave medical conditions including fatigue, dehydration and in extreme cases even Fibromyalgia.

To then avoid such drastic scenarios and to gear up the appetite, consuming medical cannabis is actually quite a fair solution. As we know smoking any of the cannabis strains most often than not lead to an increase in the hunger level of any person. Overtime, with the right medical advice, a patient can safely consume marijuana to improve their appetite.

Other major symptoms that also frequently trouble the patients of anorexia are mental stress and depression. When the person so closely observes their body weight, an obsessive compulsive disorder regarding the appetite is bound to develop. Each pound on the weighing scale induces the worst kind of anxiety. An elongated time period of an anxiety infested world will then ultimately lead towards a depressive stage.

It is obvious for the problem of insomnia to pop up in patient’s lives when the stomach is upset all the time and the mind is never at rest. Insomnia is a sleeping condition that hampers the person from peacefully sleeping at night. Sleeping time is the time for recovery and for the body to heal while the brain rests. To then timely address such a dangerous disorder is something that is absolutely necessary.

It is a proven fact that with the right consumption of marijuana people can resolve their sleeping issues. To then draw up an effective plan to incorporate the use of cannabis to get rid of insomnia is pretty obvious.

A Detailed Guide on Using Cannabis for Insomnia

Medical cannabis acts as a sedative and can help promote better sleep. Can it help with your insomnia? Read more to find out. 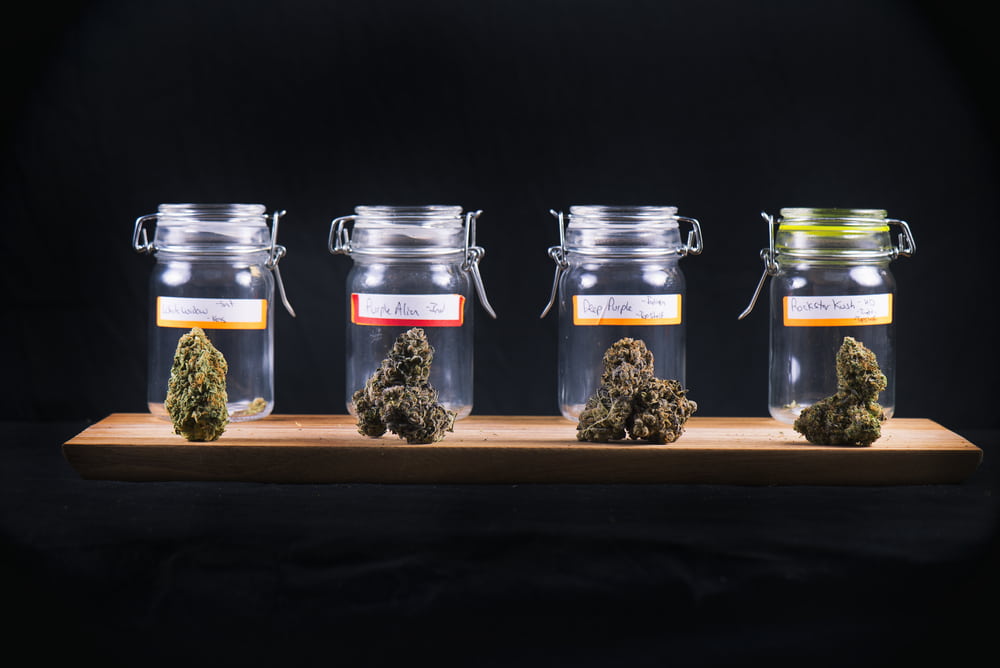 Smoking cannabis strains is arguably the fastest and most effective way of consumption of marijuana to dispel the symptoms of Anorexia. Let us then share a list of special strains that you can use for it.

Also referred to as Runtz OG, Runtz has come into much popular use in the past few years. The rise in its use could be due to its potent effects as well as its delicious aroma and flavor. A strain that produces a smooth smoke and gives the best smoking experience, Runtz gives mood uplifting benefits to the users. Providing a long lasting high, it also works to stimulate the appetite of the user.

Quite a popular strain if you are just a beginner, Sweet and Sour Widow is an indica-dominant strain. The effects of smoking this strain will be high in its medical aspects due to the same percentage level, i.e. 8%, of both THC and CBD in it. Such low cannabinoid percentages is also why it is the best strain for a newcomer to start with.

More of a sedative effects-inducing strain, Grandaddy Purple is the perfect one for Anorexic patients who suffer from insomnia. In addition to its positively drowsy effects it also works to combat appetite loss symptoms. With an immediate effect that will make you sleepy for a good amount of time, consuming this strain is advised before bedtime for the optimum benefits.

With an earthy and grounded fragrance, Gorilla Glue is immensely popular as a strain that makes the body of the user heavy. Dispelling anxiety and making the person relaxed enough to sleep peacefully at night, Gorilla Glue is a worthwhile strain to consume. Also, due to its stunning appetite increasing smoking after- effects, it can be sufficiently utilized by an Anorexic patient.

Wedding Cake strain is almost as delicious as its namesake. Due to its high THC content this strain gives a power packed effect to whoever smokes it. It is quite ideal in boosting the appetite of the person by driving up the hunger level after a few puffs. The best part about this strain is that it will also work to enhance the taste of food that is being consumed.

Is Anorexia a Qualifying Medical Condition for MMJ Cards?

Where in some states the specification of this disorder is not apparent, it is common knowledge that if the MMJ doctors think that the patient requires the use of cannabis to improve the symptoms assaulting them, they won’t back out from recommending it. So, if you are suffering don’t worry, just be 100% honest with your doctor.

There are many aspects of cannabis that are still in dire need of intense research and monitoring. Since some benefits like appetite stimulation are quite clear and apparent, it is important to utilize them as perfectly as possible. This guide has hopefully answered all your possible queries about how cannabis can work to dispel the severe symptoms of Anorexia, an intense eating disorder.