CBD vs. Prescription Pills: 5 Pharmaceuticals that CBD Can Replace

In clinical trials and research studies, CBD is quite effective in pain control, as an antidepressant, anti-inflammatory and for treatment of certain conditions such as epilepsy. There is an unsanctioned use of CBD products with supplements, gums, oils, and high concentration extracts available in different forms and chemical-percentages.

Hemp extracts are generally well tolerated with an upright safety profile and many countries have modified their national controls to accommodate them as part of the medicinal products. Currently, the approval of pure CBD products is underway but with keen supervision by the relevant authorities to ensure it doesn’t attract recreational users.

Most CBD products are administered orally either as an oil solution or capsule while some are taken via intranasal or sublingual routes. With the advanced research studies and developments supporting the use of CBD for medical purposes; patients are gradually switching from pharmaceuticals to hemp products.

A study on cannabinoids in health and disease shows that CBD can effectively treat up to twenty different ailments. These findings have revolutionized the health care landscape and have provoked more and more studies to authenticate earlier reports.

CBD Vs Prescription Pills: Which one is better?

The answer relies on the treatment you choose for yourself. And we all know for a fact that all the prescription pills have some or the other side effects. Instead, it is clearly mentioned inside the packaging of some medicines that the side effects may include nausea, headache or sweating.

Now, how many of you see medicine commercials? I am sure all of you. The next time you sit down to watch a commercial on pharmaceuticals, make sure you notice the instructions given at the end of the advertisement. They often display a list of side effects at the end. Therefore, it is no surprise that prescription pills have side effects.

But is CBD an alternative?

CBD is a component derived from the cannabis plant. Several studies show that it is beneficial in treating several health conditions. But to what extent?

It is a question that bothers many people. Also, it is noteworthy that CBD is derived from a plant and it is non-psychoactive in nature. So the side effects of CBD include vomiting, nausea, fatigue, and irritability. Whereas the side effects of pills are severe. From bleeding, heart attack to difficulty in speaking. All these side effects are comparatively dangerous than the ones with CBD.

But it would not be wise to say that you should switch to CBD and stop using prescribed pills. Because some pills work effectively without any side effects. The question of the usability will perhaps depend on your doctor. So it is wise to first visit a medical marijuana doctor or MMJ Doctor and then take the dose for treating a specific health condition.

For many years, researchers and medical experts have been hinting on the possibilities of fully adopting certain CBD for therapeutic uses due to its efficiency, less dependency and relatively low cases of negative side effects.

A research study on the substitution of prescription drugs by hemp extracts proves the popularity and effectiveness of medical cannabis seeds. That said, switching of prescribed drugs to CBD should be done with the doctor’s consent to avoid inappropriate dosage and health-related issues.

Here are the 5 pharmaceuticals that can be replaced by CBD.

Anticonvulsants belong to a group of drugs that are used for the treatment of epileptic seizures. The drugs in this group can be classified either as newer or classic anticonvulsants. The former are better tolerated and have a wider range of therapeutic use than classic counterparts.

Examples of common drugs in this category include Levetiracetam and Valproate both of which have dose-dependent side effects, especially on the central nervous system. Besides being anti-seizure drugs, anticonvulsants can also be used for pain management or as mood stabilizers in patients with bipolar disorders.

One of the CBD-based drugs for epileptic seizures that’s FDA approved is Epidiolex. The drug is effective for the treatment of seizures common in Dravet syndrome. Epidiolex is available in oral solution and can be used both for adults and children above the age of 2 years.

These are prescription drugs used for pain alleviation. Opioids are derived from opium which is extracted from the poppy plant. Some of the common opioids include codeine, hydrocodone, morphine, and oxycodone. These prescription drugs have an infamous link with drug addicts due to the higher chances of dependency and a sense of well-being associated with its use.

In 2017, the US department of health and human services formulated a 5-point strategy to combat the opioid crisis.

CBD oil, on the other hand, has been reported to be quite effective in pain treatment with little to no dependency among patients. This makes it a great replacement especially for young people who are highly susceptible to Opioids addiction.

Anxiolytics are a group of prescription medications used to relieve anxiety. These drugs have long been used to treat anxiety disorders and other related physical or psychological symptoms. Anxiolytics work rather quickly and can be habit-forming hence they’re usually prescribed for short-term use.

They target the chemical messengers in the brain where they help calm the abnormal levels of excitability. Common anxiolytics are prescribed as benzodiazepines and include; alprazolam, clonazepam, diazepam, etc. These medications aren’t recommended for people with a traceable history of substance abuse or addiction.

Unlike anxiolytics, CBD works to reduce anxiety or treat related conditions without the risks of addiction. CBD oil targets serotonin receptors which cause the sensory parts of the brain to regenerate neurons that help keep a balance of the anxiety hormones.

While there’s a close relationship between anxiety and depression, the two vary in terms of symptoms and effects they have on the overall health. Depression is more of a mental issue that often starts in early adulthood. Depression affects the brain and many OTC medications have been proved to be quite effective in relieving symptoms and even for treatment purposes.

Drugs used as antidepressants work by keeping a keen balance among the chemicals in the brain called neurotransmitters. Each antidepressant works differently and it’s best prescribed by a qualified doctor. Some of the common antidepressants include; SSRIs, SNRIs, dopamine reuptake blockers, and tetracyclic antidepressants, etc.

One of the most effective uses of CBD beside the treatment of epileptic seizures is as an antidepressant drug. CBD has a strong psychiatric potential which induces rapid and sustained antidepressant effects even on a small dose.

Non-steroidal anti-inflammatory drugs (NSAIDS) are some of the most common OTC medications used to treat a variety of inflammatory conditions; from asthma, allergies, arthritis to autoimmune diseases. Some of the common NSAIDs include Aspirin, Ibuprofen, Naproxen, etc.

Arthritis is one of the inflammatory diseases that are common among people of different ages, races, and gender. CBD oil has played a great role in relieving pain and stiffness associated with arthritis and some of the pharmaceuticals that have been replaced by the cannabinoids include; meloxicam, Celecoxib, diclofenac, etc. 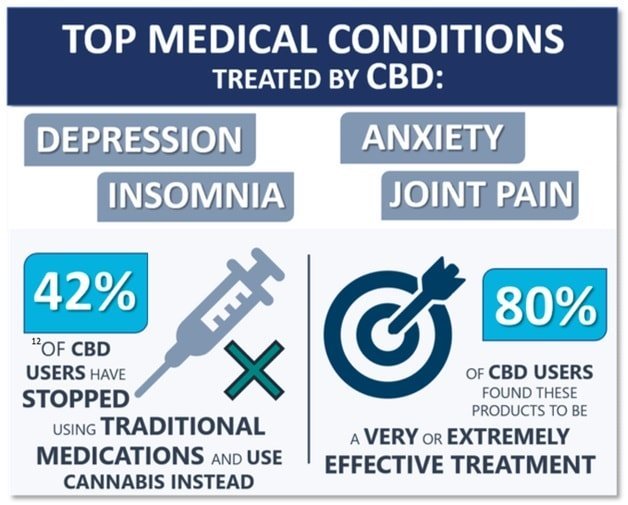 With Canada making history in her nationwide legalization of both recreational and medical marijuana; the hemp market is yet to record an exponential growth. Several investors are flocking into the country to have a share of the rapidly growing world economy. Before purchasing cannabis products you can always read the review at Herbonaut. This will help you decide the best CBD products for your particular use.